Riverside Cemetery is significant for its landscape architecture, which beautifully reflects the natural landscape style and rural cemetery design introduced in the 1830’s. The landscape is graced with winding paths, ponds, and ornamental plantings. Woven into the fabric of this pattern are the striking monuments, reflecting the characteristics of neo-classical, Gothic, and romantic design.

The neo-classical style is well represented by obelisks, tombs, pillars, and pedestals with Greek or Roman detailing, often topped by urns or torches. The Gothic form is reflected in the spires and tombs with elaborate Gothic tracery and pinnacles, and in the Hall Memorial Chapel (c.1884), designed by noted Waterbury architec, Robert Wakeman Hill. The romantic statues and tombs display emotions, reflect nature, or are represented by allegorical figures contemplating the human condition.

Monuments in the cemetery represent the work of noted 19th century sculptors hired to create works of art to adorn family plots. There are several works by George Edwin Bissell, including the Elton Memorial Vase at the entrance to the cemetery, as well as the Booth and Chatfield monuments. One of the cemetery’s best known monuments is the giant figure, Wisdom, designed by Truman H. Bartlett for the family plot of Waterbury industrialist Aaron Benedict.

An October 1857 article published in “The National Magazine” reads, “The Cemetery of Riverside is situated at the distance about three fourths of a mile southeasterly from the central portion of Waterbury, upon the right bank of the Naugatuck River. The name which has been adopted for this beautiful spot is most happily suggestive of its situation. From various elevations within the enclosure, the river forms a beautiful feature in the landscape, winding gracefully as it does through alluvial flats; beyond which on either side wooded hillsides arise, forming the lines of the horizon.” 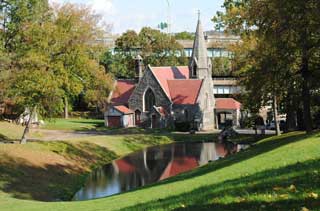 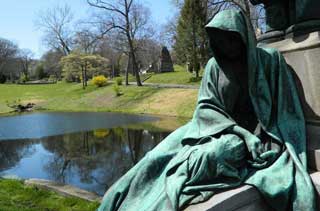 Riverside Cemetery has a total area of 36. 4 acres with the most significant monuments erected between 1870 and 1920. A walk along the meandering paths brings one face to face with the burial places of Waterbury’s brass barons, inventors, thinkers, activists, cultural icons and entrepreneurs. Also within the confines of this rural retreat are the bodies of our Puritan ancestors whose remains were transferred from the Ancient Burying Ground (1695), once located at the present site of the Silas Bronson Library on Grand Street, to Riverside in the 1890’s. 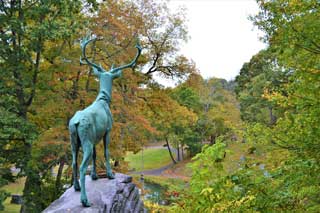