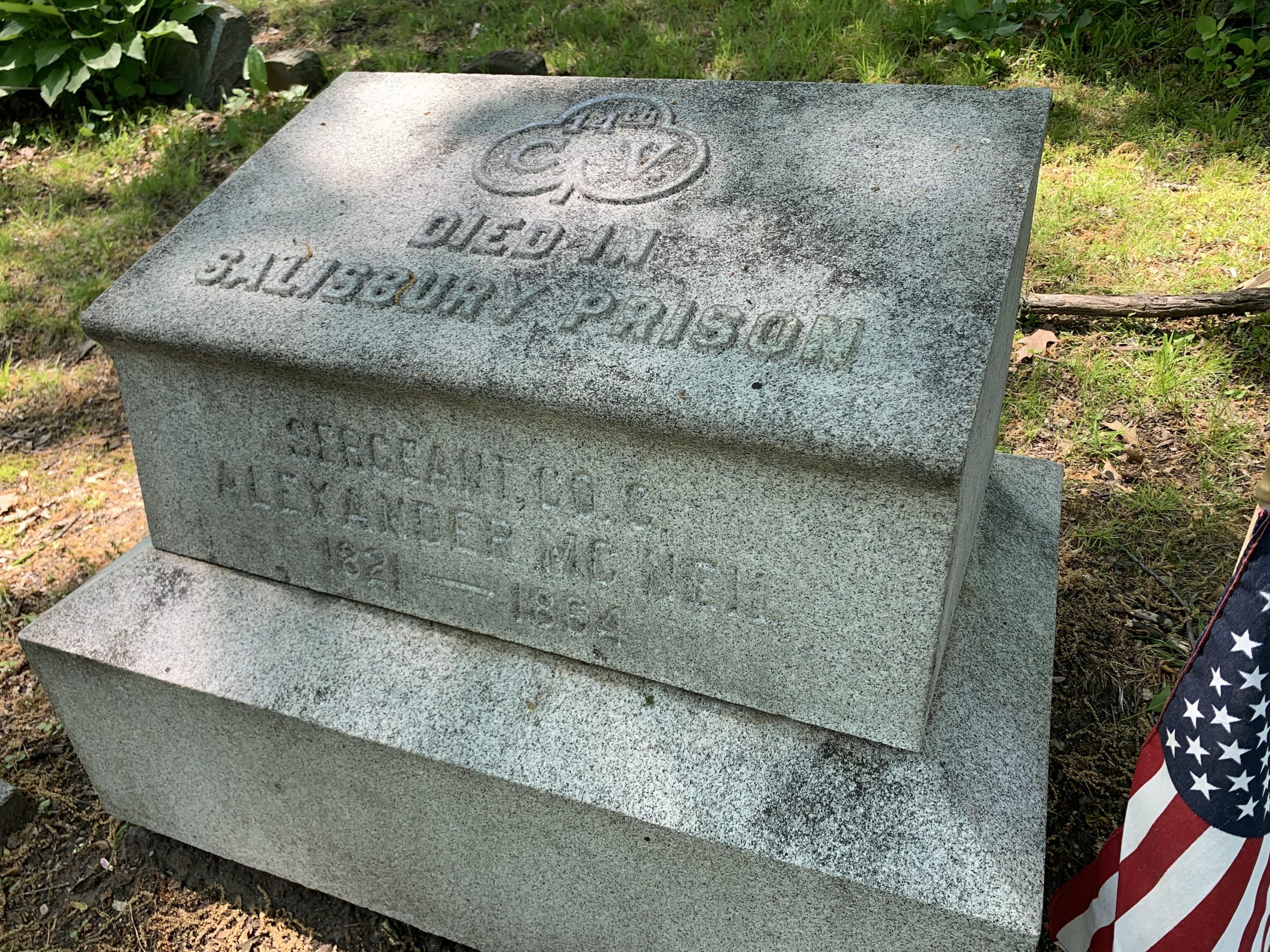 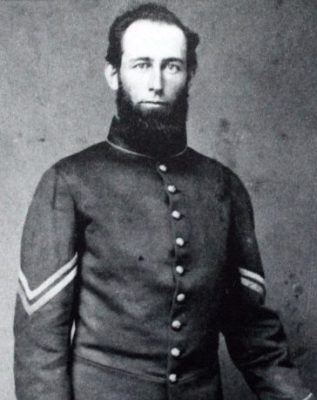 Sgt. Alexander McNeil and the 14th Connecticut Volunteers were the first to cross the icy waters of the Rapidan River at Morton’s Ford.

Feb. 6, 1864, in Culpeper County, Va., broke with cold rain, sleet and heavy fog; the weather would not improve throughout the day. The Union soldiers surprised the Confederates stationed just across the river and by 9:30 captured about 30 troops.

That would be the last bit of good news for the Federals that day. The offensive would end in failure as about 6,000 U.S. soldiers were sent on an impossible task: to attack the winter camp of more than 25,000 Confederates about a mile back from the river as a distraction from a U.S. raid on Richmond which never took place.

The day would prove worse for McNeil, of Waterbury.

The story of Sgt. McNeil, by Martin Begnal, assistant managing editor for news, and president of the Friends of Riverside Cemetery,  first appeared in the Waterbury Republican-American May 30, 2021.  Click through for more on the 14th Connecticut Volunteers and Rep-Am video presentations of the story. See the newspaper pages at the bottom of this post.

Not long after the first Union soldiers crossed the Rapidan, the heavy cannon and artillery of the Confederate Army of Northern Virginia were awakened and positioned on a small rise above the ford. From this vantage, the Confederates ripped apart the charge.

Still, the 14th Connecticut, the point of the spear, pressed on and came within about 100 yards of the Confederate entrenchments.The fighting continued well into the darkness but the advance would stall. About 2 a.m., the Federals were forced to pull back, leaving many of its dead and wounded where they lay. Sgt. McNeil was among them.

The Confederates took light casualties at Morton’s Ford while about 260 U.S. soldiers were killed or wounded and another 40 were missing or captured. The 14th Connecticut suffered the brunt: nearly half of all the dead, wounded and missing came from its ranks.

“It accomplished nothing. It was military foolishness,” said Clark B. Hall, a Vietnam veteran and a founding member of the American Battle field Trust. “It was a harebrained scheme and all these guys died for nothing.”

McNeil’s paper trail of military service ends at Morton’s Ford: he was listed as mustered out on Feb. 6, 1864. The military initially listed him as dead and then later as missing in action.

Yet word of McNeil’s fate somehow made it back to Waterbury. His widow erected a small granite monument – complete with the 14th CV badge – at Riverside Cemetery with the inscription: “Died in Salisbury Prison.”

Salisbury Prison was a Confederate prisoner of war camp in Salisbury, N.C. which became a place of misery and death for Union soldiers by the end of the Civil War.

The prison was built to hold 2,000 men but had more than 10,000 by the fall of 1864. Union soldiers were malnourished, drinking water contaminated with human waste and sleeping in holes scratched into the earth. They died of disease, starvation and hypothermia faster than the Confederate guards could account for them or bury them.

About 5,000 Union soldiers – initial estimates were put at more than 11,000 – were buried in 18 trenches dug 250 feet long in a cornfield behind the prison. The mass graves were marked in 1870 with white marble markers for the thousands of unknown soldiers buried there.

“When we have folks from up North come who want to see where their ancestor is buried, we have to tell them, unfortunately, out here, somewhere,” said Ed Curtis, who with his wife Sue Curtis run the Salisbury Confederate Prison Association. He motioned toward an acre of perfectly maintained Bermuda grass at Historic Salisbury National Cemetery.

It is almost certain that Sgt. Alexander McNeil is buried in one of those mass graves.

‘Fighting for the North’

McNeil was born in Scotland in 1821 and first shows up in Waterbury on the 1840 census. In 1845 he married Sarah Northrup and in 1850 McNeil was made a naturalized U.S. citizen. He was listed as a mechanic on his enlistment papers.

The Civil War, fought by the South to maintain slavery and by the North to preserve the Union, was more than a year into hostilities when McNeil signed up to fight. He was already 42 when he mustered in as a corporal at Hartford on Aug. 20, 1862, twice as old as many of the other enlistees.

McNeil was part of a new unit, the 14th Regiment, Connecticut Volunteer Infantry, which would before the war was over fight in every major battle from Antietam to Appomattox, where Confederate Gen. Robert E. Lee surrendered to U.S. Gen. Ulysses S. Grant, ending the war. “The 14th is the most battle tested regiment from Connecticut, and they have the greatest story,” said Matthew Warshauer, a professor of history at Central Connecticut State University and author of “Connecticut in the American Civil War.

“Having their first battle be Antietam and then Fredericksburg and then having a very tough winter encampment and they come out of it making it all the way to Appomattox, that in itself is pretty remarkable,” Warshauer said. “They go through so much.”

The 14th Connecticut, newly mustered, fought at Antietam, which remains the bloodiest single day in American history. McNeil survived, as he did at Frederickburg – “and they got hammered,” Warshauer said – and Chancellorsville, and Gettysburg. The victory at Gettysburg, in which McNeil and his fellow soldiers played a critical role, was decisive, and the Confederates were generally in retreat for the remaining 21 months of the war.

In the fall of 1863, the 14th Connecticut saw action at Bristoe Station and then in winter camp at Stony Mountain, just north of the Rapidan River, from where they would launch the attack at Morton’s Ford. After more than 16 hours of fighting at Morton’s Ford, much of it hand to hand, in dark and terrible weather, the Federals pulled back.

Sgt. Alexander McNeil was one of the missing 19 soldiers of the 14th Connecticut that day.

Some of the Union fallen were buried there, and after the war, many of the bodies were moved by the government to National Cemeteries or returned to their hometowns. Warshauser said except for the Civil War itself, the largest federal program up to that point in U.S. history is the reinterment of soldiers.

“They go out to battlefields and to makeshift cemeteries all over the South to try to find the remains of Union soldiers, and to try to properly identify them.”

McNeil’s body was never found. The monument at Riverside Cemetery is just that – he was not buried there. But the monument is clear: “Died In Salisbury Prison.” Warehouser said it’s most likely that McNeil’s family heard he had died at Salisbury from another member of the 14th who was at the prison camp with him. “They wouldn’t come up with that out of the blue,” he said.

The captured and wounded Union soldiers collected from the battlefield were taken to prisoner of war camps, including Salisbury Prison.

Hall, of the American Battlefield Trust, said it’s likely McNeil was wounded at Morton’s Ford and the Confederates took him prisoner, ultimately at Salisbury Prison. “When you go to a prison, that wound that you had is not going to get any better, as a practical matter,” Hall said.

There are thousands of unknown U.S. soldiers buried at Historic Salisbury National Cemetery, some in individual graves with markers and thousands more in 18 mass graves.

In 1906, McNeil’s niece, Mary S. Olssen of Plainfield, N.J., wrote several letters to the War Department trying to find out what happened to her uncle. Though there were calls from the Grand Army of the Republic seeking veterans who knew Sgt. Alexander McNeil at Salisbury, it does not appear that anyone answered those calls for information 40 years after war.

Charles Page, in his 1906 history of the 14th Connecticut Volunteer Infantry, wrote that “if anyone pursuing this record, as imperfect as it is, gains a larger impulse of patriotism and a broader and more hopeful view of our country’s destiny, that patriotism and hopefulness will be a portion of the inheritance bequeathed to him by fortitude and valor, suffering and bravery of the noble 14th Regiment, Connecticut Volunteers.”

Sgt. McNeil in the Republican-American